Preliminary design for the California High Speed Rail project is proceeding in the absence of key regulations from the California Public Utilities Commission (CPUC), the Federal Transit Administration (FTA), the Federal Railroad Administration (FRA), and numerous other agencies. While high speed rail is a very mature technology, it is still foreign and exotic in the United States, and our regulatory agencies do not yet have an effective or complete regulatory framework in place to direct the development of high speed track and trains. The regulatory vacuum is already causing some strange and potentially regrettable design decisions to be made, with negative consequences for the peninsula corridor.

The side clearance dimensions around passenger rail platforms in California are regulated by the CPUC under General Order No. 26, originally issued in 1948, covering every relevant railroad situation from stock chutes to icing refrigerator cars. Where freight trains share tracks with passenger trains, as they do on the peninsula corridor, G.O. 26 limits passenger platforms to a height no more than 8 inches (203 mm) above the top of the rails (ATOR) to allow trainmen to ride on the side of freight cars without fear of getting clipped. Of course, none of these olde-tyme railroad practices are very relevant to 21st century rail technology. 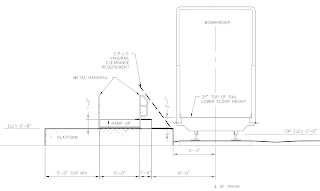 Nevertheless, 8 inches is the maximum height of all existing Caltrain platforms. Taller platforms are allowed, but only beyond 7 feet 6 inches (2.3 m) from the track center line; in other words, taller platforms are only allowed if they do not come closer than about 3 feet from the side of a train. A lot of good that does for passengers! Combine G.O. 26 with ADA accessibility requirements, and you get a ghastly regulatory abortion called a "mini high platform" (see figure at right), to facilitate wheel chair boarding using a so-called "bridge plate" manually placed across the yawning moat between the high platform and the train. Mini-high platforms continue to sprout up and down the Caltrain line, most recently in Redwood City and Menlo Park, while elsewhere in the world, humans have discovered level boarding.

Of course, the regulatory rigors of accommodating freight trains are not anywhere on the CHSRA's radar screen, which is why they are planning for level boarding platforms regardless of where Caltrain eventually ends up--one can only hope, higher than eight inches. At stations to be served by both HSR and Caltrain, namely San Francisco, Millbrae, Redwood City or Palo Alto, and San Jose, it is quite possible that we will end up with different, incompatible platform heights with station tracks forever assigned to one or the other type of train. This runs counter to the most basic principles of interoperation, where the flexibility to assign any train to any platform (in a pinch) is paramount.

Moving beyond MOUs, who will bring about amended regulations to ensure that we have a common platform standard for HSR and Caltrain?

Who will make sure this standard allows the off-the-shelf procurement of new trains, without costly redesign? A hint: the most relevant platform heights are 22 inches (550 mm) and 30 inches (760 mm).

Why is Caltrain apparently not vigorously pursuing a waiver of G.O. 26?

Like platform clearances, overhead electrification of railroads is regulated by the CPUC. General Order 95 specifies the rules governing overhead electric line construction in California. Garden-variety 25 kilovolt overhead electrified railways do not exist in California, and G.O. 95 therefore does not allow them. That's right: 25 kV electrification is currently illegal in California. Caltrain has long-standing plans to electrify the peninsula corridor, and had been pursuing new regulations with the CPUC to cover 25 kV trains. More recently, the approach appears to have shifted towards obtaining a waiver from G.O. 95 instead.

Whatever happens, why is the heavy lifting for high speed rail being left to Caltrain? Moving beyond MOUs, where is the coordinated approach with HSR?

Railroad safety in the United States is regulated by the FRA in a manner that places a premium on crash survival over crash avoidance. That's why we still have the 19th-century practice of train engineers calling signal aspects to their conductor (unless texting on their cell phone), with few if any automated systems to catch human errors. This safety philosophy is well-suited to the cost structure of the heavy freight rail business that dominates our landscape. On the opposite end of the spectrum, high speed rail safety relies almost entirely on avoiding a crash in the first place--not unlike airliners. In Europe, high speed trains zoom through dense fog at nearly 200 mph, with a train control computer watching over the driver's every move. Both philosophies achieve the intended level of safety, but what is supposed to happen when you need to mix both types of traffic on the same corridor, as is planned on the peninsula?

To their great credit, Caltrain is taking the national lead on the issue of mixed traffic regulations, as part of their plan to operate European-style passenger trains that are considered "non-compliant" with existing FRA safety regulations. As of September 2008, Caltrain staff estimated the likelihood of obtaining regulatory relief to be closing on 90 percent. That's very encouraging.

Caltrain's safety concept includes a radio-based positive train control system to be installed on the peninsula when the corridor is electrified, known internally as CBOSS (Communications-Based Overlay Signal System). This raises a host of questions, again moving beyond generic MOUs:

Why is Caltrain specifying CBOSS as a wireless system, excluding an entire segment of the wired train control market?

Is CBOSS an expensive re-invention of the wheel, where existing train control systems such as the Japanese Digital ATC and the European ETCS Level II might plug-and-play?

Why is Caltrain moving ahead with a solicitation this year, fueled by $500k in federal funds earmarked by congresswomen Jackie Speier and Anna Eshoo, for implementation in the next couple of years--before HSR train control requirements are fully defined?

Why should Caltrain be taking the lead on this critical technology issue, when the standard they develop will need to be applied California-wide to the entire HSR system and likely other HSR corridor traffic such as Metrolink, Union Pacific and BNSF?

Sometimes, doing it right means stopping and charting a new course. One of the fundamental principles of good systems engineering is that you must develop a complete and concise set of design requirements before you dive into the detailed design of station platforms, overhead electrification or complex train control systems. Caltrain does not seem to have fully absorbed the extent to which HSR alters the requirements of nearly every improvement project in their pipeline. Preliminary design activity on all the above items should be slowed and resources re-allocated towards bringing the technical requirements and regulatory framework into better focus. The successful integration of HSR and Caltrain on the peninsula corridor depends on it!
Posted by Clem at 9:08 PM