Headspans and Poles, Oh My! 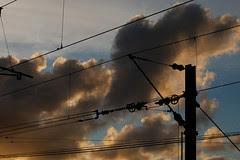 The High Speed Rail and Caltrain electrification projects converge on one requirement: electrification with 25 kV overhead wires. This is a standard choice around the world, easy to implement, compatible with most train types, commercial off-the-shelf, and able to handle the high power loads (many megawatts) drawn by fast trains. The photo at right is a typical sample. (credit: Vitó) Electrification is a no-brainer, so you wouldn't think it could be screwed up.

Documents from the California High Speed Rail Authority and Caltrain show one particular way to electrify a four-track railroad. As Richard M. pointed out in a comment in another post, it is not the only way and it is certainly not the best way for the local conditions on the peninsula. Read on to understand why. (Warning: train geek alert. Proceed with caution.)

Supporting the overhead wires (also known as catenary) on a 4-track electrified railroad can be done with poles, headspans or gantries. The three options are described below.
Each of these options has pros and cons. We'll discuss headspans first, since that is the option seemingly favored in the California High Speed Rail Authority's Bay Area EIR/EIS cross sections (Volume 2, Appendix E, Figure CC-8), as well as in the Caltrain electrification EA/Draft EIR (Chapter 2, Figure 2.3-3).

A headspan is shown in the diagram at right. The dimensions shown reflect the narrowest practical 4-track headspan arrangement that complies with Federal Railroad Administration and California Public Utilities Commission requirements (assuming those requirements will not be waived). While their thin cables are somewhat easier on the eyes than other options, headspans also have several significant drawbacks.
Given that headspans have these drawbacks, it's worth looking at the other options. 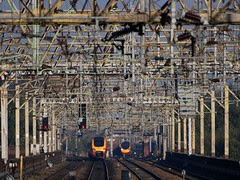 Gantry frames are aesthetically the most upsetting, as the photo at right shows. (credit: polandeze) This photo is sure to be a hit with detractors of HSR on the peninsula. Gantries are not just uglier than poles because of their massive horizontal beams, but they are structural overkill in the benign conditions of the Bay Area. Gantries are typically used in situations were mechanical loads on the wires are high, horizontal spans are very wide, or vertical clearances are limited. This is exemplified by some areas of Amtrak's Northeast Corridor between New Haven, CT and Boston, MA, where the relatively recent overhead electrification is overbuilt to withstand large forces from hurricane winds and the heavy buildup of ice during winter storms. Obviously, we don't need to worry about ice storms or hurricanes here on the peninsula, and we hope the HSR and Caltrain folks won't unquestioningly emulate Amtrak.

Poles located between the inner and outer pair of tracks, as shown in the diagram at right, have many advantages:
Poles do have one slight downside: the California Public Utilities Commission, which issued the existing clearance standards for rail infrastructure in California in 1948 (that's right, nineteen forty-eight!), requires 8'3" clearance (2.51 m) between a pole and the center line of the track. Including 1'6" for the tensioner assemblies that hang from certain poles, that puts the minimum track spacing at 18 feet, about 3 feet more than without the poles. Nevertheless, overall width of the right of way may not increase that much because less clearance is required along the edges, where poles are not present.

For either poles or headspans, the four-track electrified right of way running at ground level can fit within 70 feet (21.3 m), in a pinch. While the foregoing discussion is somewhat arcane, it will be quite relevant in those situations along the peninsula where the Caltrain right of way is narrowest, where HSR may cause greater community impacts and possibly eminent domain takes.
Posted by Clem at 10:30 PM