Will BART Bust a Move? 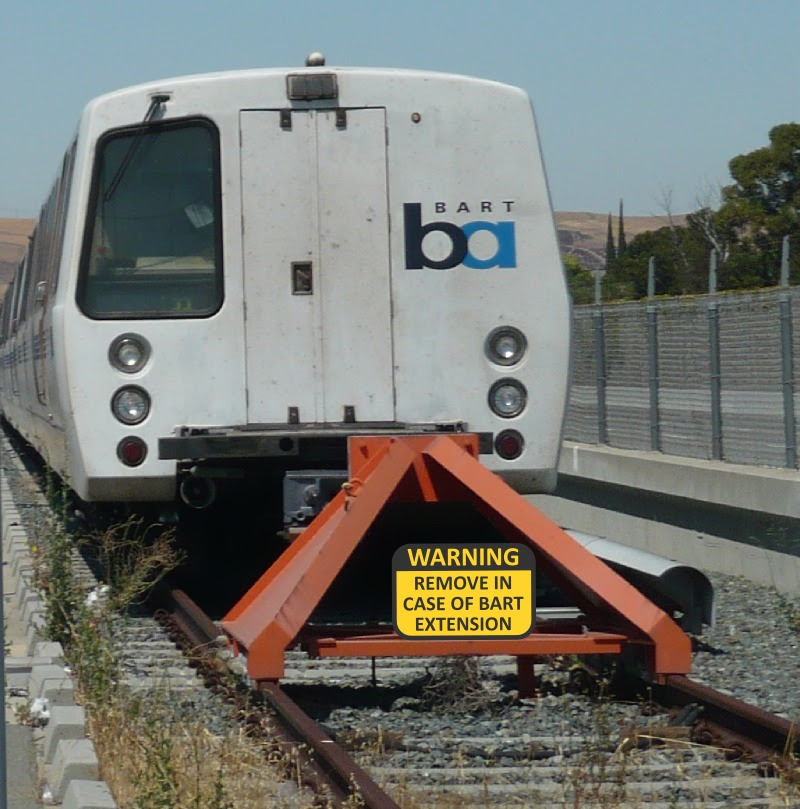 The unfortunate reality of Bay Area transit politics is that twenty-eight agencies compete for funding and ridership with very limited coordination.   At the top of this pile is BART, the biggest of them all.  Not so much BART the transit operator, but BART the expansion-thirsty transit-industrial complex (functioning somewhat like the military-industrial complex), as facilitated by the Metropolitan Transportation Commission (MTC).  (photo at right by cplbasilisk, modified with permission)

With recent developments in the peninsula high-speed rail story, it's worth taking a step back and imagining BART / MTC's next moves in this slow-motion game of political chess, assuming for a moment the following motivations:
The resulting exercise can either be viewed as a crackpot conspiracy theory, or as a simple thought experiment rooted in recent history.  Where MTC and BART have successfully assembled billions of dollars for the Millbrae/SFO and San Jose/Santa Clara extensions, Caltrain has repeatedly floundered: no downtown extension, no electrification, no Dumbarton rail, and the list goes on and on...  Supposing this historical pattern were to be sustained, what specifically would be BART's logical next moves?

The long-running Pacheco-Altamont controversy over the Bay Area HSR alignment, still simmering in the courts, is driven on one hand by not-in-my-backyard sentiment in communities impacted by the Pacheco alignment (notably Palo Alto, Menlo Park, and Atherton) and on the other hand by transit activists who argue that the Altamont alignment makes far more technical sense to serve the immediate transportation needs of the Bay Area in a coordinated and sustainable way.

BART and MTC were firmly in the Pacheco camp because of the need to preserve for BART a key piece of rail right of way between Fremont and San Jose (the former Western Pacific line, purchased by VTA in 2002).  This right of way would almost certainly have been claimed by HSR under any reasonable Altamont scenario.  Worse, a blended HSR/commuter rail project could have undermined the very purpose and need for BART in that corridor.

Today, this concern has been overcome by events, and the BART extension to San Jose is a done deal.  Pacheco HSR no longer plays a role in defending this important BART turf, and thus may no longer garner the same level of support from BART and MTC as it once did.

Move #2: Promote Altamont HSR with a BART Connection at Livermore.

The BART board recently approved a more detailed study of a future extension to Livermore, along I-580.  While this extension is a waste of money on its own merits (as are most BART extensions), and is still far from becoming reality, it could be sold as a key enabler for a phased implementation of HSR, especially under a budget-constrained environment.

Livermore as a BART-HSR transfer point has been considered before, if only discreetly, as part of the half-hearted "Altamont overlay" that the CHSRA has been studying in addition to the baseline Pacheco Pass alignment--always with the insistent disclaimer that the Altamont corridor serves a completely different "purpose and need" than the high-speed rail project.  Meanwhile, MTC suggested as recently as 2007 that HSR terminate at Livermore BART, absorbing all HSR ridership into BART (see comment L017-8).

As an interim phasing opportunity, Livermore BART would actually work quite well:
The Livermore BART extension would be routed south along Vasco Rd. or Greenville Rd., past the Laboratory, to terminate just south of Livermore at a new BART/HSR interchange station on the outskirts of town.  This station would be located on an Altamont HSR alignment proposed by outside groups but studiously ignored by the CHSRA.  This Altamont HSR route is known as the SETEC alignment, after the French HSR consulting firm that performed the preliminary engineering.  The SETEC alignment is noteworthy in that it avoids major residential property impacts to Livermore and Pleasanton, one of the main arguments used by the CHSRA to select Pacheco in the environmental study process.

Here is a rough point-by-point comparison of Altamont/Livermore and Pacheco/Gilroy interim scenarios:

Using the money saved by tunneling only 4 miles to Livermore instead of 10 miles to Gilroy, the additional 25 miles of track to reach Livermore are easily paid for-- and then some, since 50 miles of track will already have been built to reach Sacramento, as opposed to zero for Pacheco.

Move #3: Dangle the Carrot of a PAMPA Subway.

The Palo Alto Weekly recently published an article headlined "Four-track design back on the table for high-speed rail," apparently implying that it was once off the table.  That seems to be the crux of a major disconnect between the city and the high-speed rail Authority.  The blended Caltrain / HSR plan, as proposed in recent months by Simitian-Eshoo-Gordon and currently being analyzed by Caltrain, was always viewed by the CHSRA as an intermediate phase, a stepping stone to the immutable objective of a four-track high-speed railroad through PAMPA (Palo Alto - Menlo Park - Atherton).  This viewpoint is borne out in the 2012 draft business plan.  Palo Alto, on the other hand, views the blended plan as a final state of the peninsula rail corridor for the foreseeable future, and believes that the four-track plan should no longer even appear in the program EIR.

BART's best move here is again to promote Altamont HSR.  For PAMPA, the advantages are thus:
For BART itself, the main advantage of Altamont is of course to preserve the future possibility of ringing the bay by connecting Santa Clara BART to Millbrae BART.  The argument that BART can make in pleading this case is that all existing infrastructure north of Millbrae (i.e. fresh grade separations in San Bruno, and existing tunnels to San Francisco) would be dedicated exclusively to HSR, thus mitigating the astronomical cost of accommodating Caltrain detailed in the 2012 business plan.

As billions of dollars slowly coalesce for a possible blended HSR / Caltrain plan on the peninsula, time will become pressing for BART to bust a move.  If the motives that underlie the above narrative are remotely true, then any attempt to electrify the peninsula corridor shall be thwarted, just the same as it has been in past decades.
Posted by Clem at 11:37 AM