Using a Train Performance Calculator, we can find out how long any given train will take to travel from point A to point B, taking into account grades, rail adhesion, aerodynamic drag, traction and braking curves, line speed limits, etc. The results of such calculations are presented below for four key types of rolling stock on the peninsula rail corridor. With these run times, you've got all the building blocks you need to build your own strings, and from those strings, your own timetable.

The trip times can be downloaded as an Excel spreadsheet (82 kB) or a PDF document (106 kB) with eight separate tables (each in its separate worksheet) corresponding to the scenarios described below. They are reasonably accurate, but perhaps not down to the second. 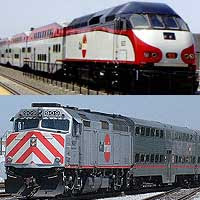 The prototype for the first set of run times is a standard Caltrain consist, with one F40 locomotive and five gallery cars. The diesel locomotive is rated at 3200 hp, and the entire train weighs 420 metric tons fully loaded with 500 passengers. The train is technically capable of reaching a top speed of 100 mph, although signal system restrictions (planned to be removed) constrain it to 79 mph today.

Note: despite their bullet nose, the Baby Bullet trains have essentially the same performance. 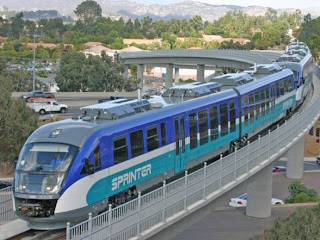 The prototype for the following run times is a Siemens Desiro Classic DMU. This DMU is in common use around the world, including here in the United States (although it is not compliant with FRA crash regulations). The train performance specs are based on San Diego's Sprinter, with a four-car consist as shown in the photo. Total power output is 1680 hp total for a train weighing 392,000 lb fully loaded. Top speed is 75 mph; because of this limitation, the run times are valid regardless of the track speed limit. 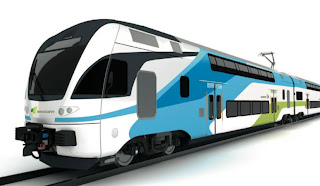 The next set of run times is for a Stadler KISS EMU. This six-car double-deck EMU, similar to the types under consideration for Caltrain's electrification project, has a top speed of 125 mph. The spec sheet shows that the train weighs about 325 metric tons fully loaded with 500 passengers, and is rated at 4000 kW (5300 horsepower).

The EMU's secret weapon is the ability to unleash a short-term (few minutes) burst of 6000 kW (over 8000 horsepower), which takes it into the same performance league as a high-speed train. This is handy for performing overtakes on the express tracks without disrupting high-speed traffic--a key capability for a "blended" Caltrain + HSR plan. This trick is not possible with a DMU, which is more akin to a moped entering a freeway. The run times below are for the same train using its 6000 kW short-term rating, to be used sparingly. 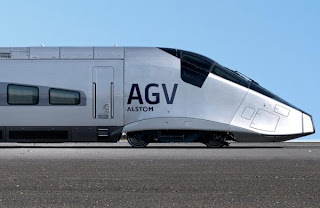 The final set of run times is for a state-of-the-art high-speed train of the sort that might someday be used in California. It is an 11-car Alstom AGV with a top speed of 220 mph, but used in this case at far lower speeds. The train weighs 404 metric tons and has a very high power output of 9120 kW (over 12,000 hp) as is common for high-speed trains. Generic high-speed train specifications have been compiled by the CHSRA.

If you missed the download link above, here it is again for all the above scenarios: Excel spreadsheet (82 kB) or PDF document (106 kB)

Rules of Thumb
Building Strings for a Timetable

With the preceding rules of thumb in mind, it becomes a reasonably straightforward exercise to build a "string" that describes the position versus time of any given train, whether it be local, limited, express or long-distance HSR--based on the prevailing speed limit, train type, and stopping pattern. For example, we can construct the timetable for Caltrain 216, departing 4th & King at 7:19 AM, using the following building blocks:
By the time you get to San Jose, it all adds up to an 8:25 AM arrival... three minutes early by Caltrain's timetable, but that has some extra generous padding at the end of the run, in order to juice their on-time statistics.

Once you've built a few "master" strings for the basic Caltrain and HSR service patterns that you envision, you can put them on a spreadsheet and slide them around to build the best-possible clockface timetable. When you do this, make sure that no two strings in the same direction of travel ever come within less than about 3 minutes of each other--otherwise, passing tracks will have to be added to allow the strings to touch or cross. This process illustrates how a timetable can tell you where the four-track sections are actually needed.

Bear in mind the limitations of this simplified approach. The most beautiful timetable can fall apart when things don't go according to plan. The pros use expensive software that can figure out how robust a particular timetable will be to the inevitable perturbations, something that factors heavily into service planning. That particular aspect of the problem isn't dealt with here.

The trip times were calculated in Octave using numerical integration of the differential equations of motion. Traction, friction and drag curves are taken from train specification sheets; where not available, these are calculated based on weight on drivers and power (for traction) and the modified Davis equation (for friction and drag). Curve and terminal area speed restrictions are included. The speed limit assumptions include: 35 mph in the Transbay Transit Center; 40 mph out to 4th & King; 65 mph at Bayshore; 70 mph at Sierra Point; 75 mph at San Bruno (assumes new grade separation); 75 mph at Millbrae; 85 mph at Hayward Park; 80 mph at Palo Alto; 70 mph at Lawrence / Bowers; 45 mph in the San Jose approach. All trip times take into account the 0.6 mile discontinuity in the milepost numbering near CP Coast. All trip times assume that the train accelerates and brakes at the maximum service rate, and maintains a margin of 2 mph below the speed limit at all times. Small (few-second) differences in northbound vs. southbound trip times are ignored. Results should be accurate to about ten seconds. Your Mileage May Vary.
Posted by Clem at 11:15 AM