Where Four Tracks Will Be Needed

"Phased Implementation" is really about asking where will four tracks actually be needed? Before this concept was floated, the basic idea was to lay four tracks all the way up the peninsula, a solution that requires little intelligent thought, but gobs of money.

The way to answer this question objectively is to play with timetables. Actually, a sequence of timetables, each of which represents a "Phase." For Phased Implementation, a "Phase" could be defined as follows:

Phase: a coherent set of capital improvements that enable a new timetable that provides better service, by some agreed-upon set of metrics, as compared to the old timetable.

We already described one example of how you might define service metrics for Caltrain, and these could be expanded to measure HSR service quality. The metrics, regardless of how they are defined, need to be timetable-independent, clear, concise, and transparent to the public. Discrete capital improvements, i.e. construction projects, can then be priced out on an individual basis and examined in the context of the new timetables that they enable. The idea is to pick the low hanging fruit first, and to build the improvements that produce the biggest improvement in the service metrics for the least construction cost or community disruption, i.e. the biggest bang for the buck. 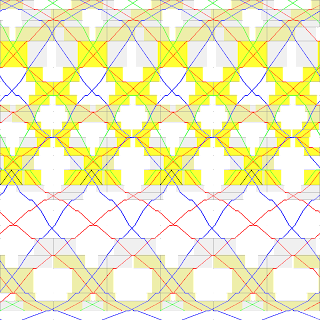 To exemplify the phased planning process and to make it more accessible to the armchair service planner, we can take the train performance calculations previously presented and fold them into an automatic service pattern generator that generates a graphical representation of a timetable and immediately highlights where additional tracks will be needed on the peninsula corridor.

Try it for yourself: Service Pattern Generator

Rather than work with tables of departure times, this tool specifies intuitive clockface timetables as graphical position-versus-time string diagrams, based on a few basic parameters for each type of train on the peninsula corridor:
Using these parameters, the various overlapping service patterns that describe Caltrain locals, Caltrain expresses, and high-speed trains can quickly be specified. While the service pattern generator may initially take a while to grasp, it is worth experimenting with it to develop an intuition for how a blended service plan could actually work.

The key output of the service pattern generator is the yellow highlighting that indicates where trains will catch up and overtake. In these locations, triple or quadruple tracks will be required. The challenge is to develop service patterns that provide good service for both peninsula commuters and long-distance travelers, while minimizing the cost and community disruption that comes with additional tracks.

Professionals do this using much more powerful software that can quantify how resistant these timetables are to cascading delays, but the ultimate results might not be too far off from what this simplified tool produces, when using conservative values for dwell and padding. Far from trying to do the pros' job for them, this exercise empowers the public to understand the trade-offs that must be contended with.

Using the service pattern generator, we can explore a few examples of how to produce maximum bang for the buck.

Example 1: here's what Caltrain might look like with a mid-line overtake, often mentioned on this blog as the next logical step after (some would even say before!) electrification. Expresses meet locals at Hillsdale to exchange passengers across the same platform. Only one new grade separation is required at 25th Ave. The local holds for three minutes at Hillsdale so that downtown San Mateo can remain with two tracks. This is a typical illustration of cost vs. benefit: the hundreds of millions needed to quadruple-track San Mateo have to be weighed against the two-minute savings for the local. In this particular example, your metrics would tell you that it's not worth it.

Example 2: here's what things might look like with 3 high-speed trains per hour thrown into the mix. We now assume the entire corridor has been upgraded for 100 mph operation, which presumably implies major grade separations and crossing improvements. Introducing HSR requires quadruplication from South San Francisco (well, probably Bayshore) to Burlingame. The bottleneck at San Mateo is allowed to remain with two tracks. Further south, Atherton and Menlo Park are spared while Palo Alto and Mountain View require quadruple tracks. These two new overtake sections illustrate what would be required to provide a reasonable starting level of HSR service via Pacheco. Notice how no enormous civil works are required anywhere in the terminal areas, whether in San Francisco (no expensive tunnels starting at Bayshore) or San Jose (no hulking multi-level station). Transbay to SJ HSR trip time is less than 45 minutes; this can be reduced by increasing the HSR speed limit to 125 mph, but as you'll see if you try it, considerably more construction would be required. Are the few minutes saved worth the extra investment?

Example 3: in the never ending Altamont vs. Pacheco debate, Pacheco proponents often point out that this route is clearly best for Caltrain because it "improves" Caltrain all the way to San Jose. Try this for improvement: here's a service pattern where high-speed trains don't gum up the corridor and head for Altamont from Redwood City. This pattern assumes 4 trains per hour Caltrain local, 4 tph Caltrain express, 4 tph HSR to San Francisco, 4 tph HSR to San Jose via the East Bay, and 4 tph of Dumbarton local commuter rail. 20 trains per hour is a very high level of peninsula train service, probably more than the region will ever need... and look!
All this is enabled by only two overtake sections, grade separation of the northern half of the corridor, and punchy 6000-kW Electric Multiple Units (and also, to be fair, a new Dumbarton crossing).

If you like the power of experimenting with service patterns, there's a contest you can enter! Entries may be made in the comments section below by copying and pasting (or better yet, linking) the URL string of your favorite service pattern, with a short paragraph to describe why you think this is the best balance of service, cost, and community impact. Entries will be judged by an impartial panel of armchair experts consisting of Clem and Richard Mlynarik (the brains behind the tool), whose own service patterns will not count for the contest.

The grand prize, a big shiny ASCII trophy known as the Takt Cup, will be awarded in two weeks.
Posted by Clem at 10:45 PM