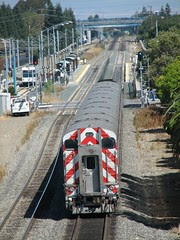 Mountain View, home to some of the biggest names in Silicon Valley, is the third busiest Caltrain stop behind San Francisco and Palo Alto, and serves as a transfer point between Caltrain and the VTA light rail system. (photo by LazyTom.) The city has so far adopted a conciliatory attitude towards the high-speed rail project, unlike several cities to the north. In its scoping comments (p. 90), Mountain View first and foremost asks to be considered as a candidate for a peninsula HSR stop, citing its strategic location, transit connections, and easily accessible freeway network. The CHSRA's preliminary alternatives analysis for the first time featured Mountain View as a potential peninsula HSR station.
The railroad right-of-way through Mountain View parallels Central Expressway, a four-lane divided highway that is part of Santa Clara County's expressway network. This inherently gives the peninsula rail corridor a less residential character than in communities to the north, although several new housing developments have been built near the tracks in recent years, with more planned in the vicinity of the San Antonio Caltrain station. The latter station, opened in 1999, replaced the primitive stop formerly located at Rengstorff Avenue with what was billed as a model transit-oriented development.

The vertical profile of the existing Caltrain tracks is shown in the diagram below, created from Caltrain track survey data. The tracks slope gently, with the southern end of town a full 50 feet higher than the north. The slope is steepest (a bit over 0.6%) in the section between Castro St. and the Rte. 85 overpass, near the downtown station. 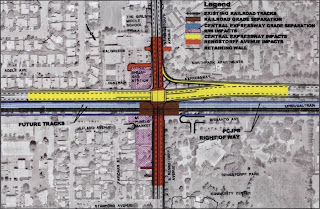 The city has been planning a grade separation at Rengstorff Avenue since 2002, which is currently entering the environmental review process independently of high-speed rail. The city's preferred alternative (see feasibility study in PDF Attachment 2) calls for Rengstorff and the nearby intersection with Central Expressway to be depressed under the tracks. The $45 million plan already includes a corridor expansion to four tracks, as shown in the figure at right. Other design alternatives were eliminated: trenching the tracks at this location would have been complicated by the nearby Permanente Creek, and residents were concerned about the visual impact of elevated tracks. Nevertheless, the HSR scoping comments submitted by the city (see p. 95) ask that all vertical alignment alternatives be re-examined for the Rengstorff grade separation. Since the technical and community constraints have not changed at this location, the HSR alternatives analysis is likely to be consistent with the city's prior study.

That leaves the crossing at Castro Street in the downtown area, the most challenging design puzzle in Mountain View, where only one vertical alignment solution stands out as realistically feasible. The options that will probably not be practical are:

That leaves just one reasonable option: a split grade separation with the tracks elevated about 15 feet above grade and Castro Street sunk by about 5 feet. Sidewalks could stay at the current grade level, and the station would be elevated, not unlike the existing design at Belmont. To the north, the tracks would require a 2% grade to duck under the bridge at Shoreline Blvd. To the south, the tracks could run level (which is of benefit for building a new train station) to meet the rising natural grade, returning to ground level at the Stevens Creek. The resulting vertical profile is shown in the diagram below, in green; compare to the infeasible below-grade alignment shown in red.

While Caltrain and high-speed rail would comfortably handle this vertical profile, a rigid adherence to a 1% grade limit for the benefit of freight trains would likely require Castro Street be closed entirely to road traffic.

The Caltrain right of way is quite wide throughout Mountain View, with 75 - 100 feet available to build out the corridor to four tracks. The relatively sharp curve at San Antonio (the #8 worst curve on the peninsula) just barely allows 125 mph operation, although it could be straightened within the confines of the right of way. Does that mean Mountain View will easily accommodate an expanded, four-track, high-speed corridor? Sadly, no. 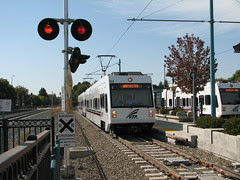 In the late 1990s, Caltrain agreed to let VTA and the city construct a light rail extension on its right of way. The light rail system now runs alongside the Caltrain tracks for about one mile, ending at a 50-foot wide terminal with expansive storage tracks near Castro Street (photo by LazyTom). On the western side of the Caltrain tracks, the city built a "transit center" to replace the dingy asphalt strip that previously served as a Caltrain platform. This $20 million intermodal facility was completed in 2002 with a new plaza and modern-day replica of Mountain View's old train depot, which might have earned a spot in a register of historic places had it not been razed in 1959. All this recent construction consumed a large portion of the available right of way, where ample space to build four tracks existed as recently as 1998. Not surprisingly, the city clings to this new civic infrastructure and suggests among other options that HSR be routed via the Central Expressway median--never mind that $20 million is a relative pittance in the context of the peninsula HSR project.

Further south, one southbound lane of Central Expressway will likely be taken to route the VTA track east of the bridge support pillars at Rte. 85 and Whisman, freeing up space for the four-track peninsula corridor.

The light rail situation is further complicated by (a) VTA's inexplicable ambition to double-track the short section of single track that encroaches on the Caltrain corridor, (b) the possible need to maintain freight train access to the Moffett Drill Track (see docket FRA-1999-6254 ; the switch that connected the VTA tracks to the peninsula corridor was recently dismantled, but the Moffett spur is not formally abandoned), and (c) the difficulty of relocating the Evelyn VTA station--incidentally second-to-last in ridership on the entire light rail system, with roughly 60 daily passengers. All three of these factors need to be examined with a critical eye towards who will pay and who will benefit. 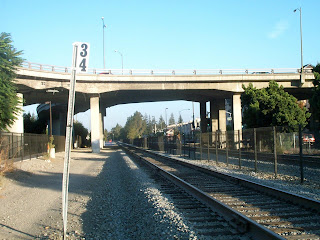 Further north, another pinch point exists near the San Antonio station, where the San Antonio Road overpass (a 1960s structure that Caltrans lists as a deficient bridge) does not provide sufficient horizontal clearance for four tracks. The nearby pedestrian underpass would also require modification, likely as part of its extension across Central Expressway to the planned residential redevelopment of Hewlett Packard's former Mayfield campus. It goes without saying that the San Antonio platforms will need to be rebuilt, just like anywhere else on the peninsula. 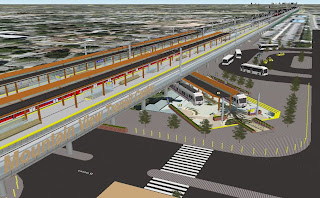 To visualize downtown "done right," download Mountain View 3D Model (2.2 Mb) for Google Earth. All the illustrations in this section are taken directly from this model, built by Richard Mlynarik.

While Mountain View's transit center is billed as an intermodal, accessible facility, there is vast room for improvement in passenger circulation. The challenge of designing a rail alignment that overcomes the twin obstacles of Castro Street and the light rail tracks presents an opportunity to improve Mountain View's transit center by creating a modern, functioning gateway into downtown. While the construction impact would indeed be frustrating, especially so soon after the area was rebuilt, this would simply reflect the haphazard manner in which the existing facility was planned, with little regard to future HSR requirements or effective pedestrian circulation.

Currently, the light rail tracks end on an unpleasant concrete island hemmed in by Central Expressway and the Caltrain tracks, requiring a circuitous route for pedestrians to access the trains. Centennial Plaza, the faux-depot and the bus loop cut off the Caltrain platforms from downtown. All passengers wishing to transfer between buses and trains must use crosswalks.

There is surely a better way. One possible redesign of the Mountain View Transit Center is described below. It is an exercise to achieve the best possible transportation functionality, providing these specific benefits:

The resulting configuration is a four-track, two-platform Caltrain / HSR station, elevated over Castro Street. The light rail station slants diagonally underneath the elevated tracks, with the trolleys pulling right up to the corner of Castro and Evelyn in a sunken Centennial plaza. (Light rail requires the same 16-foot vertical clearance as road traffic on Castro). The twin Caltrain / HSR island platforms are extended north over Castro, enabling direct access to sidewalks on both sides and a platform-to-platform transfer between all transit modes.


For additional views and detail, download the 3D model for Google Earth.

What happened to the retro-faux-depot? Remember, this design is an exercise in form following transportation function. In 1895, the depot would have housed important functions such as mail and baggage handling, signaling staff, and a telegraph operator. Today, those functions are obsolete, so the depot building has no place or purpose. It's gone, for the greater good of functional 21st-century transportation. Architecturally, there are far more exciting possibilities that enhance rather than impede functionality.

Regardless of the details of how exactly HSR is integrated with Mountain View's transit center, one thing is clear: the high-speed rail authority's charter is to build HSR, period. Ensuring that the intermodal connections at Mountain View can live up to their potential will largely be up to the city and its citizens, who ought to take strong initiative to ensure it's done right--without letting their judgment be unduly clouded by the $20 million they spent this past decade.

NOTE: This post will be updated continuously, as warranted by additional information or new events relating to Mountain View.