Caltrain Has a Dwell Time Problem

To help visualize why, let's use position-versus-time string diagrams, often discussed on this blog.  Imagine trains following each other on a single track that runs from San Jose to San Francisco (ignore the other direction for now).  This red line is a local train making a lot of stops.  It leaves San Jose, and a while later arrives in San Francisco.  If you looked really closely you might see the individual station dwells, small horizontal kinks that occur whenever the train is stationary and time passes, but when you squint, it looks pretty much like this:

Every once in a while, this local train comes to a station where Jane, a wheelchair user bound for San Francisco, would like to board.  Because we don't have level boarding, getting Jane on board the train involves manually deploying lifts or ramps to ascend the several steps from the platform into the train.  Conductors must help Jane through the mechanics of the boarding process, which can easily take several minutes but feels like an eternity, even for Jane.  Timetable planners allow for riders like Jane by making sure that no other trains are scheduled right behind each other, to absorb these randomly occurring super long dwells without causing a train traffic jam.  They call it padding.  Here's what padding looks like, in pink:

This being a blended system on "primarily two tracks," we've got express trains and even high-speed trains using the same track as Jane's local.  A faster train looks like this blue line:

The blue line is steeper because the express train can cover the same distance from San Jose to San Francisco in much less time.  Here comes the express behind the local:

The timetable planners don't want the express to be delayed.  That's why they left a big gap between the trains, giving the local a good head start out of San Jose so that the express won't catch up to it before San Francisco.  Alternately, here is the local departing San Jose right behind the express:

Once again, a big gap opens up behind the express because the local is so much slower to arrive in San Francisco.  Now it's rush hour, and this is what "blending" soon looks like (not to scale):

In one hour, six trains can arrive in San Francisco.  Our string diagram is full of gaps, which means we are making very poor use of the capacity of our single track.  How do you fix this?

First, you electrify Caltrain.  While this isn't cheap, one of the main advantages of electrification is that EMUs start and stop much more quickly, so that on average, a local can get to San Francisco several minutes sooner while still making the same station stops.  The local will have a higher average speed than it did before.  Compare:

See how the new EMU local train shows up as a steeper line?  That's because it spends less time moving between stations.  (Note to Atherton: electrification is not just an emissions thing.  Tier IV diesel trains can't pull off this neat trick like an EMU can.)  Now this is what the "blended" rush hour looks like:

If you compare it carefully to what we had before, we can now fit eight trains in the span of one hour, instead of six, because those dreaded gaps are shorter.  By increasing the average speed of the locals, we were able to squeeze in more trains (and more passenger capacity).  Caltrain seems content to declare victory and live like this happily ever after.  This is what they envision as the "blended system".  Whenever Jane decides to ride the train, the pink padding still ensures that following trains aren't delayed too badly.

It's better, but still kind of mediocre.  Especially for Jane.

What if the local train could spend less time standing still at each station?  Dwell time can be reduced by level boarding, a step-free and gap-free configuration where you simply walk on or walk off the train, just like when you ride BART.  For a given number of passengers getting on and off the train, level boarding shaves off about 1/3 of the station dwell time since they can all shuffle on and off more quickly and seamlessly.  The magic of reducing dwell times is that while the train's actual speed is no higher, it still gets to San Francisco sooner, because it saved a few seconds during each station stop.  A few seconds here, a few seconds there, and pretty soon you're talking several minutes.  The average speed went up without the actual speed increasing!  The string for an EMU local with level boarding now looks like this:

If the local arrived in San Francisco ten minutes earlier thanks to electrifying Caltrain, it can arrive another five minutes earlier than that by having level boarding at all stations.  Electrification saves time between station stops, and level boarding saves time during station stops.  The two work together as perfect complements to each other.

The diagram above is actually wrong, and here's the second amazing thing about level boarding: Jane can get on and off the train like everybody else.  Not only does this give Jane the dignity and equal treatment that she deserves, but it saves everybody else the grief of those randomly occurring Jane delays.  Because dwell times are now predictable, timetable planners can get rid of the padding they applied in case Jane wanted to ride before.  Like this:

Caltrain commissioned a study of station dwell times, which found that across a sample of 5149 station dwell observations, the median duration from wheel stop to wheel start was 49 seconds.  The median excludes abnormally long dwells, such as those occurring when Jane wants to ride.  The average dwell time does account for Jane and is 58 seconds, practically an eternity.  That was back in 2010.  Today, with the system bursting at the seams, average dwells are getting so long that the timetable was recently adjusted to make chronically late trains into slower on-time trains.  With level boarding, typical dwell times could easily be cut to 30 seconds.

We're really cooking now.  We can squeeze 12 trains through in one hour on the same track.  That represents a massive capacity increase, with the combined effect of reduced and predictable dwell times providing a similar benefit as electrification alone did.

Caltrain staff just doesn't seem to get this, and they are certainly not helping their board of directors understand the issue. They think of level boarding as primarily an optional comfort feature. Here is their view of level boarding, from a recent board meeting quarterly update: 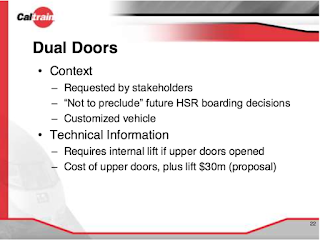 First of all, they don't even call it level boarding. Dual doors!  What a pain!  Requested by interloping stakeholders, or imposed by those annoying HSR people!  Ew, it's so complicated!  It costs $30 million to equip the new fleet!  It's almost as if they are disowning the very idea of level boarding, and reluctantly trying "not to preclude" some unspecified future decision because this stuff is just too hard to think about.  Presented this way, you couldn't blame the board or the public for thinking this is a stupid idea.  Where's the upside?

The upside is this: dual doors are the only realistic path for Caltrain to achieve level boarding, and level boarding is the only way that the blended system can work on "primarily two tracks."

This issue cannot be taken lightly, because the next opportunity to start a Caltrain conversion to level boarding will not occur until 2050, when the new fleet reaches the end of its useful life.  That's because the new fleet, as about to be ordered, cannot provide level boarding at a platform height of 25 inches.  The entire system would have to be shut down for the trains to be modified and all platforms to be rebuilt at that height.  So, doing nothing today and blindly kicking the can down the road until 2050 is not an option.  A prudent and strategic $0.03 billion down payment for a gradual transition to level boarding is minuscule as a fraction of the $2.2 billion modernization budget, and unlocks great potential for quicker and more punctual commutes as soon as the next decade.

Dual doors are a customization that amounts to less than 5% of the price tag for new trains ($30 million out of $648 million bid price).  They can hardly be used as an excuse for the massive increase in the cost of Caltrain modernization.  They will help to address Caltrain's dwell time problem.

Caltrain has a dwell time problem.  The first step is for everyone (staff, board and public) to understand it.
Posted by Clem at 2:22 PM