The Dual Mode Locomotive, Elephant of the Rails

Caltrain's revised DEIR for the electrification project is about to be released for public comment.  Meanwhile, California's high-speed rail project has suffered legal setbacks that may end up threatening a $600 million contribution of Proposition 1A HSR funds promised for Caltrain electrification  (the so-called "book-end" funding).  These events have awakened a small but vocal and persistent minority of peninsula residents who believe Caltrain should not electrify, and should seek alternate short-term solutions.

We've seen this pattern before: there was a lot of misinformation circulating about hybrid DMU trains, which were seen as an alternative to electrification when in fact they do not exist and are not capable of meeting Caltrain's requirement for high-capacity, high-acceleration rolling stock.

The new idea now going around at least has the merit of being demonstrated in the real world.  The idea is to replace Caltrain's locomotive fleet with a new type of locomotive known as a dual-mode locomotive.  You can think of it as two locomotives in one, combining a conventional diesel power train with the ability to operate on electricity where 25 kV overhead electrification is available.  To pull off this feat, the locomotive needs to carry not only a diesel power plant and an electric generator, but also a big transformer to bring the 25,000 volt electric supply down to usable voltages.

There is an off-the-shelf example: Bombardier's ALP-45DP, shown in the photo at right.  A small fleet of these beasts operates for commuter agencies in New Jersey and Montréal, Canada, where certain lines are only partially electrified.  Rather than inconveniencing passengers with a change of trains where the wire ends, these locomotives fire up a pair of 2,000 horsepower V-12 engines and continue their trip beyond electrified territory.

These make absolutely no sense for Caltrain. 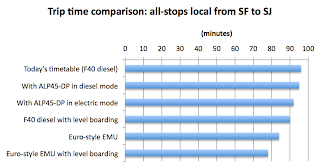 The trip time savings simply aren't worth the high cost of dual-mode locomotives.  Level boarding by itself (even with diesel locomotives) would save more time.  The lightweight and powerful EMU trains that Caltrain plans to purchase would save far more time, and are unbeatable when combined with level boarding.  See chart at left.

The only remote opportunity that dual-mode locomotives might present is the ability to serve the Transbay Transit Center, which is not designed for diesel trains, prior to the full electrification of the peninsula corridor.  The San Francisco downtown extension tunnel, however, won't be completed for at least another decade and will cost two to three times more than Caltrain electrification.  That's an awfully long time to realize the meager benefits of dual-mode locomotives, on a shaky premise that funding won't be available for Caltrain electrification even after the DTX is paid for in full.

For the peninsula rail corridor, dual-mode locomotives are clearly a proven solution looking for a problem.  The better problem to solve is how to fund the electrification project even if the high-speed rail funding is denied.