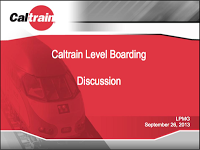 It thankfully happened: after all these years, Caltrain has finally stated something (anything!) about level boarding.  This is an improvement that has long been neglected in favor of the more flashy electrification project.

Around here, level boarding has been discussed several times already, so here are a few oldies but goodies from the archives:
There is also a nice APTA overview presentation that goes into some detail about the conflicts between level boarding and freight trains.

Caltrain's presentation sums up the main advantage of level boarding in one bullet point, "Operating efficiencies," without clearly stating why it's so important.
Caltrain's tentative plan is to study the possibility of converting all station platforms to 25 inches above rail (up from today's 8 inches) by some unspecified time in the future, and to let high-speed rail have its own set of separate platforms, most likely at 48 inches above rail.

Level boarding as envisioned by Caltrain is not a trivial undertaking.  It will be expensive, because dozens of platforms will have to be entirely rebuilt.  It will be politically difficult, not in the least because state regulations will need to be overhauled over the strenuous objections of freight railroads.  It will be time consuming, because so many platforms can't be rebuilt overnight.  It will be logistically complicated, because the system will have to continue operating during the transition with a mix of platform heights.

Why not go a tiny bit further to achieve far greater benefits, at far lower cost?

Platform sharing is the next step beyond level boarding, where Caltrain and HSR can share the same platforms at San Francisco, Millbrae and San Jose.  Platform sharing has distinct advantages that have been discussed at length on this blog.  Platform sharing between conventional trains and high-speed trains is already practiced everywhere in the world, except in those countries where track gauge precludes it.
Why are the respective agencies here not talking about platform sharing?  There is bureaucratic inertia and a general unwillingness to coordinate, sometimes verging on outright hostility.

How To Pull It Off
None of these challenges are technical.  They are institutional and political.
Posted by Clem at 11:39 PM