Protecting the peninsula rail corridor right of way from crowding or outright encroachment, whether by private developers or other agencies, has evidently not been a high priority for Caltrain.  Examples abound: a movie theater built right next to the tracks in San Mateo, a "Transit Village" planned right next to the corridor in San Carlos, a Millbrae station that constricts the number of tracks.  All of these examples complicate the task of outfitting the corridor for high-speed rail service, and may add tens to hundreds of millions of dollars to the cost of doing so.

Depot Circle, a large residential/commercial development authorized by Redwood City's recently updated Downtown Precise Plan, threatens to encroach on a vital piece of station real estate in Redwood City.  The city recently released a Request for Qualifications that outlines the project and describes its role as a future focal point for Redwood City's downtown.

Here's the problem: the railroad right of way is only 60 feet wide in this area, but the station is nearly certain to be expanded to four tracks with two island platforms to accommodate the following likely operational scenarios:
The Depot Circle RFQ asks prospective developers to address the rail corridor issue only tangentially, without offering specific design constraints: "Describe your strategy for dealing with the potential widening of the Caltrain railroad to accommodate High Speed Rail. In particular, explain how far, if at all, would you set the project structures from the current railroad, and any other site design strategies that might be employed to minimize effects of a potential future widening of the railroad."  What are developers supposed to know about railroads?

Here are some specific constraints, which are based on detailed HSR technical requirements and Caltrain engineering standards: 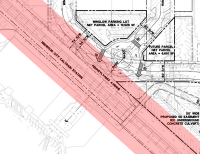 The upshot of all this: including reasonable building setback clearances, a prospective developer should make an allowance of at least 150 feet for the future expansion of the rail corridor.  A 150-foot corridor is shown overlaid on the Depot Circle parcel map in the graphic at left (see also overlay on original map, 1.1 MB PDF), and takes a significant bite out of the parcels now offered for development--including the project's namesake traffic circle.

If Redwood City wants to become what Palo Alto could have been, it's time for the city, Caltrain, and developers to make the station itself the focus of downtown, provide it with enough land, and build it to be as architecturally striking as the elevated Amsterdam Bijlmer Arena station.  If there isn't enough vision to do that, please just avoid hemming in the rail corridor.
Posted by Clem at 5:24 PM