Getting Sketchy In Mountain View 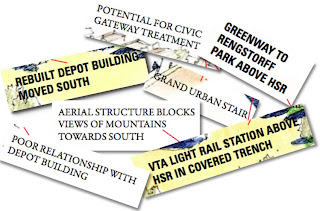 First, shockingly, the tracks are configured as separate pairs, one for HSR and another for the rather aptly-named Caltrain/Freight. As will continue to be argued on this blog, and as the preliminary alternatives analysis acknowledges, this FFSS (fast-fast-slow-slow) track arrangement would force highly inconvenient single-tracking operations during service disruptions. It would also prevent commuter train overtakes. This is the worst-possible track arrangement for Caltrain. That being said, the track arrangement isn't the point of these renderings. On to the critique.

The recently installed faux-depot, built for a couple of million dollars (a pittance compared to the HSR options now being weighed), appears in all the options for Castro Street. It is evidently a civic pride and joy, to be preserved at all possible costs--costs to state and federal taxpayers, and ongoing costs to pedestrian transit users attempting to circumnavigate it for access to the actual train station. The elevated option is even dinged for "poor relationship with depot building".

The Castro elevated alignment shows a rail viaduct with a full eighteen (18) feet of roadway clearance underneath, and gigantic 40-foot ornamental towers with "potential for civic gateway treatment" that dominate the landscape. The same urban design values as for the faux-depot (form over function!) are on full display. If you wanted to sand-bag the elevated option, this is clearly how you'd do it. A more functional and discreet plan would be (a) to reduce the clearance under the viaduct to a more reasonable 16 feet, which could still accommodate all manner of interstate trucking and military convoys, and (b) sink Castro by about 5 feet, with relatively minor impact to business frontage on the 100-block of Castro. This would not only reduce the hulking profile of the station, but also shorten access to the platforms. This exact "split-grade" plan was proposed in Focus on Mountain View, accompanied by a Google Earth 3D model, all free of charge.

The Castro trench alignment, sure to be everybody's favorite, would literally introduce a new moat between downtown and the VTA light rail station. A nice "greenway" would be wedged in between the moat and Central Expressway, on top of the HSR tracks, for a (pleasant?) stroll to Rengstorff Park. As was previously pointed out, it is not feasible to put Caltrain/Freight into a trench at Castro and still make it back up to grade over the Stevens Creek, all the while adhering to the ultra-conservative 1% grade limitation for freight. Therefore, the trench alignment clearly suffers from some basic engineering feasibility issues, unless Mountain View has plans to grade-separate the creek as well. This plan, unless Mountain View pays for it, is likely a non-starter.

The Castro at-grade alignment is a nice illustration of what happens when you try to build a full-depth road underpass on a dense city block. Street frontage is severely affected, with loss of parking and a labyrinth of ramps and steps for pedestrians, something that is unlikely to sit well with local businesses--assuming they can even survive the construction period, which involves extensive excavation. The VTA light rail station would be further isolated from downtown by a tower bridge, just another two convenient elevator rides away from all the action.

The weakness in these renderings is that grade separation is really a continuum. The elevated, at-grade and below-grade categories are artificially imposed on the problem to make it easier to understand, but end up obfuscating hybrid options known as "split" grade separations, where both the rails and road are altered (rather than just one or the other). These split grade separations can combine advantages of the different categories, to have your cake and eat it too.

It's disappointing to see renderings that show only what the train can do to Mountain View, and not what Mountain View can do with the train.

UPDATE: The city has now posted additional sketches with street-level views. Once again, the trench is made to look better than it really is; the sketch does not show the 7-foot rise at Castro Street as shown in the corresponding aerial view.
Posted by Clem at 10:29 PM